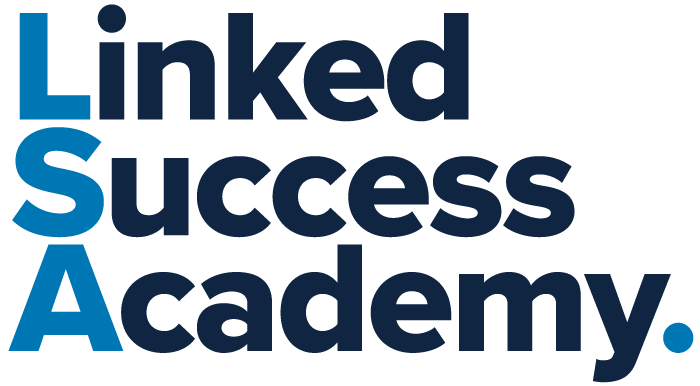 When we work with a client who is looking for a new role we have a successful proven process that we work through to get all of the information we need from them.

Carsten came to us in November 2020 because he feared his job was at risk and needed to set the ball rolling for a new job search. This was always going to be a tough search because Carsten’s ideal role was to be working for a UK construction company who either had projects in Germany or were looking to expand into Germany as that is where he is currently based.

We started with a full make-over of Carsten’s CV and LinkedIn profile and identified both recruitment executives that might be able to help him, and potential future bosses that might be in need of someone with his skills and experience. We ran a LinkedIn messaging campaign which led to over 300 new connections in the first month and 20 appointments booked, plus another 10 ongoing discussions with potential work leads.

He was not only approached by Amazon for an interview, but also Turner and Townsend with whom he had two Zoom interviews before they offered him the role which he accepted. He starts his new role in January 2021.

As all of this happened in 2020 in the middle of a global pandemic (and just before Christmas) Carsten was not confident about finding anything, so this has been a huge motivational boost in confidence for him. The process has increased his connections and he now knows that if he found himself in the same situation in the future, he already has all the right connections, so the process will be even easier next time around! He said he was extremely grateful to Annie and Usama and even more so for his Christmas job miracle! 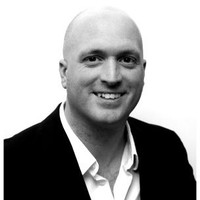 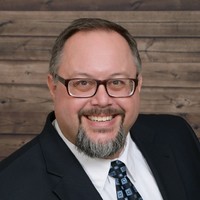 IT Leader and Strategist (COVID 19 Traction!) from the USA

Alan came to us because he was looking for a new role and his CV/Resumé was just not getting him to interview stage.

We worked with Alan to review his current Resumé and identify what was missing from it. We then worked out his Unique Selling Point and crafted a Resumé that really stood out from the crowd. We also revamped his LinkedIn profile and made sure his Resumé and LinkedIn aligned. Alan had a long career history so we created a full Resumé and also a one-page career highlights Resumé for him.

“It was great working with Annie. When I reached out to Susan at LSA, I had a 4-year-old resume that was getting no traction. They worked through some simple exercises and presented me with multiple options. My call-backs using the new LinkedIn format and resume styles took me from a call-back every other week to four a week including multiple that “found” me.”

Alan - IT Leader and Strategist

(client did not want to be named)

This lovely client hired us to create a new CV and LinkedIn profile to help him with his job search – no mean feat in the middle of a Pandemic!

We worked together to identify any gaps in his current CV, then created wording for a new CV and also for his LinkedIn profile. We added a role on his LinkedIn profile called ‘Career Highlights’ as he wanted to showcase at a glance the tip level media coporations he had worked with in the past.

We kept in touch and a few months after we completed his CV and LinkedIn profile he started in his new role as Chief Technology Officer at a major British news channel.

We will always remember Graham, because he became one of our model students! We created his CV/Resumé to stand out and before we knew it, he had received a job offer that would allow him to live very comfortably. We developed and built his brand, making him an attractive prospect for companies. Before we knew it they were approaching him. Job hunting can be boring, and we eliminated this need for Graham, all by finding his Unique Selling Point (USP), which we all have!

“I was helped at every single step along the way by Sue, and throughout the process, I was approached by lots of recruiters. Had I not landed the job that I wanted, I would have had plenty of potential interviews to choose from.”

It is a tough job market and Viv wanted to get back in the game. She was struggling to differentiate herself, so we focused on her Unique Selling Point (USP) and we started developing a job search strategy as well as improving her interview skills. She landed the job and is looking forward to starting her new role!

“Sue is one of a kind – a highly inspirational lady, she will give you all the encouragement and motivation you need to get ahead in your career or job search. If you want to get hired, Sue’s help and guidance are priceless, particularly in this tough market environment. I would definitely recommend joining the Bootcamp Job Club: How to break the traditional rules of job search! My success was most definitely inspired by Sue and I couldn’t have done it without her.” 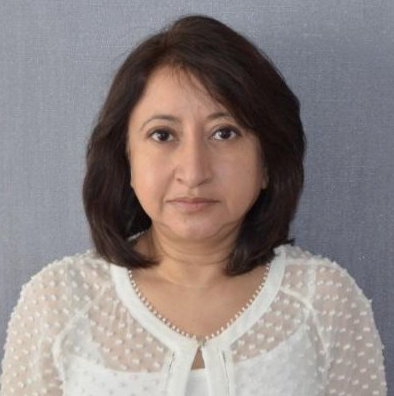 Nita got her job after going up against five other people and it happened very quickly. The great thing is even though she got hired, she has been 100% committed to making sure she is NEVER in this situation again – meaning she wants to continue to work together so that she is never stuck without a job again – opportunities will continue to come to her!

“Sue I got the job! I was interviewed last week and started on Tuesday!”

One of my favourite success stories – Marcela now works for Pepsi.

Marcela lives in Argentina and by Skype calls and some hard work, we landed her the job role that she wanted and boosted her confidence by getting so much positive feedback after her interview. No distance is too far – there is no such thing as too far!

“I really need to thank you very, very much. I want to let you know that when I presented my CV/Resume, it produced a revolution… no joke.. a friend of mine who works there told me that. I grant you that you were in my mind all of the time! Well Sue, I really thank you for your support and patience. Hopefully, I will get to travel to Great Britain to meet you personally!”

Beatriz wanted to move forward, she already had a great job in HR, but she wanted to expand her options, so we revamped her LinkedIn profile and focused on what she had achieved, while at the same time making it super clear why a company should be hiring her! Changing her LinkedIn profile from C average to A*…

“I was following a trial and error job finding strategy when I decided that I had nothing to lose if I were to get some professional assistance – that’s when Sue came into my life and she did the marvellous thing of not only turning my normal and boring LinkedIn profile into a profile with the “UAU effect”, but she also made me recognise my professional achievements and gave me the confidence to proceed. Sue was always very positive and that was contagious not only on the Skype calls but also on her emails – Sue is a fast replier and always wanted me to move forward. We have just finished my LinkedIn profile and my CV/Resume, and I’m sure some good news will come soon. Thank you, Sue, for your time, patience, great humour, positiveness and confidence in me.”

Ken was a Commercial Credit Risk Executive in the banking and financial services industry, and he was looking for a new role. We created a new CV/Resume and LinkedIn profile for him, along with a whole new set of documents to prepare him for interviews, send cover letters, and request recommendations.

"Susan, I wanted to take a moment to express my gratitude " 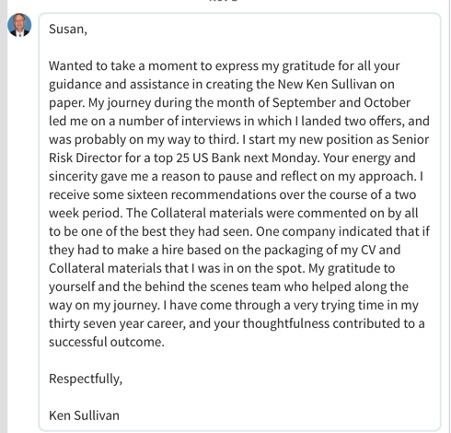 Adrian was an ex-pat living in Dubai, and he was looking for a new CFO role. We revamped his CV and his LinkedIn profile and set him on his way to shine at interviews.

Are you ready to get your problem fixed?

Masters of LinkedIn for Business & Individuals

Solutions for Getting Hired